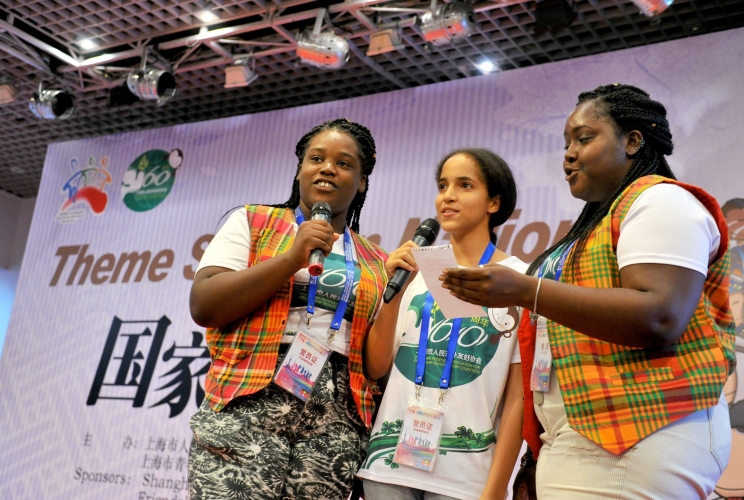 Two students, Adia Wynter of St. Anthony’s Secondary School and Francesca Southwell of Christ the King High School, accompanied by their chaperone, Ádia Duberry, recently took part in the 12th Shanghai International Youth Interactive Summer Camp hosted by the Shanghai People’s Association for Friendship with Foreign Countries (SPAFFC) and the Shanghai Youth Federation. The two students were winners of  an essay competition organized by the Antigua and Barbuda China Friendship Association (ACFA), and were ﬂown to Shanghai to participate in this 10-day event with the assistance of the Chinese Association of Antigua and Barbuda (CAAB) and the Embassy of the People’s Republic of China.

The Antigua and Barbuda contingent, as part of their cultural exchange initiative, painted a piece showcasing the national ﬂag and Antigua & Barbuda’s national symbols, while at the same time outlining the country’s map , its national dress, and two of the main highlights on the annual calendar – Independence and Carnival. During a “Presentation on Nations”, the participants from Antigua and Barbuda explained the meaning behind their painting  to a diverse audience of over 120 students and chaperones from 23 different countries across the globe. The trio also executed a rendition of a poem written by Glen Toussaint, a local Antiguan poet.

At the moving closing ceremony, Francesca Southwell was selected as the participants’ representative to deliver a speech on their combined experiences amassed during the ten days of activity.  Each country  also had the honour of staging a native performance, and the chosen medium for Antigua and Barbuda was that of  song and dance. The ceremony ended with all participants singing together on the platform.  “It was a very touching moment, as we all erupted into tears and hugs and said goodbye to our new friends,” remarked Team Chaperone, Ádia Duberry.

St. Anthony’s student, Adia Wynter, commented: “Being in China was very exciting. The architectural design and other aspects of culture were dramatically different to ours, and even though the two weeks came to an abrupt and unwanted end, I would gladly do it again. I am grateful for the opportunity to have experienced this.”

President of ACFA, Lady Sandra Williams , said that  “Antigua and Barbuda is the ﬁrst Caribbean country to participate in this venture and we are proud to join with the SPAFFC in building stronger ties between our two countries. We are planning on making this an annual activity on our calendar, to be able to give many more young people this vey valuable opportunity”.