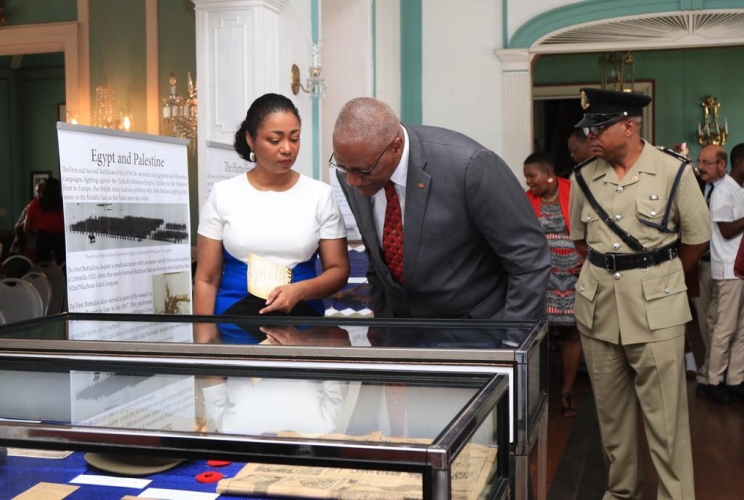 A month-long mini-exhibition entitled ‘WAR’ is being hosted under the Patronage of Their Excellencies Sir Rodney and Lady Williams. The exhibition was organized by the Halo Foundation Inc., in collaboration with the local Ex-servicemen’s Association, the West India Committee based in the UK, the Museum of Antigua and Barbuda and the National Archives.

Lady Williams, President and Founder of Halo, explained that “the venture is designed not only to showcase the important role which West Indians played in the World Wars, but to cause us all to reflect upon the sacrificial service which many war veterans and presently enlisted soldiers have given and continue to give to ensure that our nation remains free from conflict. “  Lady Williams expressed special thanks to Dr. Reginald Murphy and photographer Timothy Payne for allowing the exhibition to display some items from their historic collections.

According to the Executive Director of the West India Committee, Mrs Blondel Cluff CBE, “servicemen from the West Indies volunteered to serve in World War 1 – and although extinguished from history for almost a century, their story of bravery and commitment has now been told.” Mrs. Cluff will be a feature speaker in the closing week of the event and will present a number of lectures to secondary school students on the West Indies Regiment and the contributions made by its soldiers in World War I.

Some of the artefacts that visitors will have an opportunity to view include a victory medal, a mother of pearl broach from the badge of a British West Indies Regiment, an antique gas mask, and displays featuring little told stories of the experiences of West Indian men during that era.

The Ex-servicemen’s Association of Antigua and Barbuda, one of the 32 charities under the patronage of Sir Rodney and Lady Williams, will also use the opportunity to highlight the work of local veterans, and to encourage the general public to support the organization by wearing poppies (the flowers which were known to grow on the battlefields after the end of World War 1) throughout the month-long event. The annual National Remembrance Day Ceremony for those fallen in World Wars I and II will take place at the Cenotaph on November 11, 2018.

Following an opening ceremony on October 15, 2018, the War Exhibition will be open to the public on week days from 9 a.m. – 3 p.m. at Government House on Independence Drive.

Photo caption: (1) Their Execllencies Sir Rodney and Lady Williams review some of the artefacts on display.

(2) Members of the Ex-Servicemen’s Association and past soldiers of the British West India Regiment at the opening of WAR. 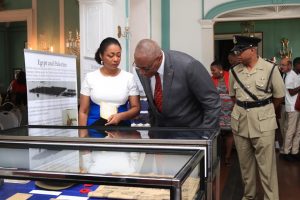 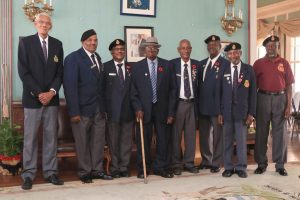