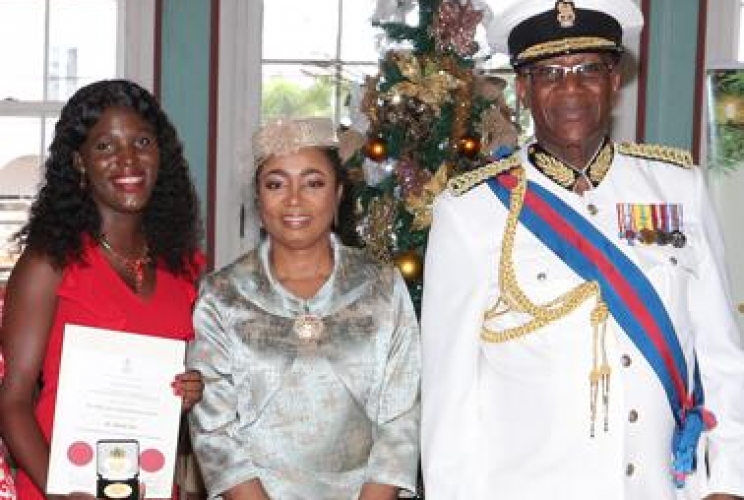 Ms. Rose, who has been the face of the Halo Foundation’s Anti-Bullying campaign for the past 6 months, composed and performed a song entitled “Bullying is Real”, which has been making waves across Antigua and Barbuda, particularly in the schools.

In explanation of why this specific cause attracted her interest, she said: “I have been through a lot, as a (victim of bullying)… I had a tough time in school.  I was told I was ugly, that I smelled bad because I was sweaty after walking to and from school. Circumstances that were beyond my control got me bullied. It was a very dark five years for me. Every day was a tormenting experience. I did have days where I laughed and was happy but I also had moments where I wanted to kill myself. I had a lot of struggles to endure, but through it all — I survived. I wrote my song to encourage those that bully others to realise the pain that they are inflicting on others…I also want to encourage anyone who is a victim of bullying to speak up, not to bottle their emotions. To vent in a healthy way…. do something that occupies your mind. To the onlookers, that see it happening and do nothing… your opinion matters and your voice may just be the one that saves a life. Stand up, SPEAK UP! My hope for the future is to see bullying eradicated in our schools. Children are our future, we have to protect them now!”

President and Founder of The Halo Foundation, Her Excellency Lady Williams, indicated that the Foundation was doing everything within its power to lessen the incidences and effects of bullying in six pilot schools across the nation.  “We are working very closely with the Ministry of Education, and are funded by the Maria Holder Memorial Trust.  Several experts are on board , and there is a clear strategy for attacking the problem. We are not only focusing on bullying, but there is a parallel teen anti-suicide program which will be launched in January with a kick-off event, “Future Proof”, organised by Halo’s team of young people, Generation Y.”

The Halo Hero Humanitarian Award is presented by the Governor General to individuals at the primary and secondary school level in Antigua and Barbuda, as well as at the college and university (tertiary) level, for acts of bravery or kindness. To date, there have been three recipients of this award.