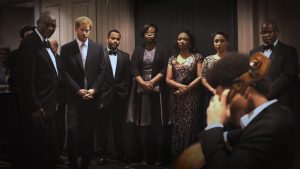 ( St. John’s, Antigua — April 27, 2018 )  Almost one year after playing at the annual Wings of Charity Gala Dinner & Auction hosted in London by the Halo Foundation Inc., cellist Sheku Kanneh-Masson has been selected to be part of the line-up of musicians who will be performing at the Royal Wedding in a few weeks. The historic ceremony will take place on May 19th at the St. George’s Chapel, Windsor Castle.

In June 2017, Prince Harry was the Guest of Honour at the Halo charity event held at the Rosewood London. In explanation of his decision to approach Sheku, the Prince indicated that he had been impressed by the passion and talent of the 19-year old.

During an Interview with the United Kingdom media Sheku said, “I was bowled over when Ms Markle called me to ask if I would play during the ceremony, and of course, I immediately said yes.”

H.E. Lady Williams, President & Founder of The Foundation was elated to learn that a young musician of Antiguan descent had been invited to play at the Wedding.   “A significant part of Halo’s mission is to expose our young people to valuable opportunity.  To this end, we are working closely with our High Commissioner in London, H.E. Karen-Mae Hill on joint initiatives, including the rebirth of the Antigua and Barbuda Youth Symphony Orchestra.”

Their Excellencies Sir Rodney Williams and Lady Williams are also patrons of the newly-formed Antigua Opera Society, and plan to support the endeavours of this organization in encouraging the appreciation and performance of classical and opera music in Antigua and Barbuda.

In addition to the annual humanitarian awards and 4-year university  undergraduate scholarships, the Halo Foundation will also be selecting 3 young representatives to travel to Venice, Italy from May to November 2018, to assist at the 16th International Architectural Biennale.”

Prince Harry listens to the cello performance of Sheku Kanneh-Mason at Halo’s Wings of Charity in London.