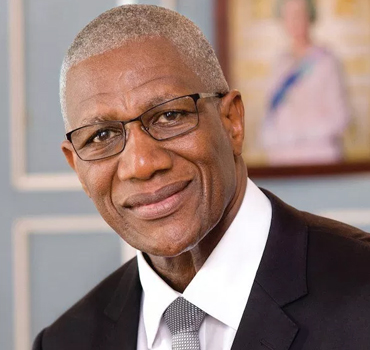 Born in Antigua on November 2 1947, Sir Rodney Williams is the fourth of five children of the late Honorable Ernest Emmanuel Williams and Educator Irene Benjamin Williams of Swetes Village. After attending the Swetes Primary and Antigua Grammar Schools, Sir Rodney Williams received his MBBS Degree in Medicine and Surgery from the University of the West Indies, in 1976. From 1978, after completing his Internship at the Queen Elizabeth Hospital in Barbados, Sir Rodney Williams pursued his private medical practice in Antigua & Barbuda.

In 1984, following the tragic death of his father, Sir Rodney Williams entered Parliament as Representative for the Constituency of St Paul. One of the founding figures of the Antigua Trades & Labour Union and the Antigua Labour Party, Honorable Ernest Emmanuel Williams served alongside the Father of Antigua & Barbuda Dr Sir V C Bird, National Hero, eventually becoming one of the longest serving parliamentarians in the history of Antigua & Barbuda.

As Minister of Economic Development and of Tourism Sir Rodney Williams made largely unsung but highly significant contributions to the Tourism landscape, facilities and product of Antigua & Barbuda. While holding those portfolios Sir Williams had charge of the main engine driving the National Economy, which prospered under his stewardship. As Minister of Education, Sports and of Youth, Sir Williams’ contributions stand unequalled.

While he served in Parliament and as a Minister of Government, Sir Rodney Williams continued to provide free medical clinics in St Paul, begun in 1979. When Barbuda was without a doctor, he travelled to that island weekly, to offer pro bono clinics. Sir Williams also gave pro bono lectures on pediatrics to nurses at the Holberton Hospital. He has never refused medical attention to any patient, who could not pay, in keeping with his philosophy that “a person’s health should not depend on a person’s wealth.”

A long list of major projects and initiatives crucial to the economic development and quality of life of Antigua & Barbuda became reality under his supervision, or benefited from his input. The list includes, but is not limited to, the following: the Multi-Purpose Exhibition Center at Perry Bay; the Antigua & Barbuda Hospitality Training Center at Dutchman’s Bay; scheduled air services between Antigua and Germany via Lufthansa and Condor; direct flights between Miami and Antigua; extension of the St Johns Deep Water Harbor; the Royal Antiguan Hotel at Deep Bay; expansion of Sandals Antigua into Sandals Mediterranean; major increases in cruise ship arrivals; deployment of National Hero Sir Vivian Richards as a Tourism Ambassador, a CARICOM first; tourist arrivals from the UK grew to surpass arrivals from the USA and Canada combined; significant increases in numbers of yachts participating in Antigua Sailing Week; the Education Levy, which provides essential support for the Nation’s crucial education effort; completion of the Antigua State College Science Block; introduction of Health and Family Life Education as part of primary and secondary school core curriculum;
establishment of ABIIT as a Center for Excellence for Technology in the OECS; amending the Education Act to give the Ministry of Education supervisory authority over tertiary institutions; service on the Educational council of the University of the West Indies; CDB financing to equip all government secondary schools with science laboratories; major increases in numbers of trained teachers in government primary and secondary schools; and expansion of the St Johns Deep Water Harbor turning basin to facilitate docking of larger cruise vessels.

Sir Rodney Williams has recorded an equally impressive portfolio of achievements and contributions in the fields of Sports Medicine, Aviation Medicine and Community Service. A Fellow of the Royal Society of Medicine since 1986, Sir Williams holds membership in the Sports Medicine Association, the Airline Medical Directors Association (AMDA), the Civil Aviation Medical Association (CAMA), and the American Aerospace Association. A member of the CAMA Board of Trustees since 2006, he has served as an Executive Board Member of that organization since 2010. In 2007, the United States Civil Aviation Medical Association awarded him a Fellowship, the highest level of recognition available in that country. Sir Rodney Williams became an Executive Fellow of the American Aerospace Association in 2011.

In the field of Sports, his major career avocation, Sir Rodney Williams saw to the provision of free medical attention for athletes in Antigua & Barbuda. He served as Chef de Mission for the National Team participating in the Pan Am Games – Puerto Rico (1979), the Los Angeles Olympics (1984), and the Central American & Caribbean Games – Santo Domingo (1986). Sir Williams acted as a lead Medical Delegate to the 2011 CARIFTA Games in Montego Bay. While doing so, he served as team doctor for national teams in athletics, boxing, cricket, football and netball while giving free medical care to other sporting disciplines when requested. During this time also, Sir Williams published articles and produced programs in local media on a range of health, sports, and physical fitness issues. Throughout these years of intense involvement in sports health Sir Williams founded, participated in, and served in an executive capacity for many sporting bodies. Elected First Vice President of the National Olympic Association in 1988, he became President in 1992. In 2004, the NOC appointed him Member for Life.

Sir Rodney Williams is married, with three sons. His personal interests are lawn tennis, music and reading.
Sir Rodney Williams was appointed as Governor General of Antigua and Barbuda in August 2014. His Excellency’s appointments by the Queen as a Knight Grand Cross of St. Michael and St. George and as a Knight of the Most Venerable Order of the Hospital of St John of Jerusalem were announced in the London Gazette on October 17, 2014 and December 22, 2014 respectively.
Along with his wife, Lady Sandra Williams, they serve as patrons of close to twenty (24) charitable organizations.